My father was a professional photographer for many years and then after he retired, it became an extensive hobby. He constructed his own dark room in the basement of our house where he processed all his own work – this was way before digital photography was available.

Silver bowls overflowed with awards and ribbons presented to him over the years for distinctive black and white portraits, and landscapes. His fascination with Manhattan led him to Washington Square Park where he shot photos of men and women deep in thought over their next chess move. Many of his photos are framed, and hang on the walls of my home where they’re always admired by friends.

While still living at home I began to take an interest in my dad’s work, and sometimes helped him crop and develop photos. Later on, I developed my own style – and shot mainly in color as opposed to his black and whites.

When I lived in Manhattan I always carried a little 35mm camera with me and tried to capture the true grit of the city. My photo, “Hand in Hand” was included in part of an exhibit held at the Delray Beach Library in 2005: “A Father-Daughter Retrospective.” It continues to be one of my favorite photos and I truly shot it on the fly. I had one chance to photograph an elderly woman holding hands with her caregiver and walking down a busy city street while traffic passed by. I could never have hoped to set up a human interest picture like that, so I was just plain lucky that day. Another one I particularly like is called “Man at Work,” which speaks for itself. Unfortunately, my dad had passed away years before the exhibit – it was one of my proudest moments and I know he would have been thrilled.

“Birds of a Feather,” the picture that appears on the home page of this site was taken in a parking lot behind Duffy’s Sports Bar. The subjects were very cooperative.

I began to paint and tried my hand at watercolor, which was a total disaster, and moved on to acrylic and pastel techniques. I took several classes at the Boca Raton Museum of Art and particularly enjoyed the pastel portrait sessions. I wasn’t terribly talented, but the female models sure loved me because I removed their lines, wrinkles, jowls, pounds, and plumped up their lips and hair. Several of the models asked for their flattering portraits so they could frame and hang them in their homes. The supreme compliment. My teacher was a lovely woman with a good sense of humor; she knew I was no Picasso, but she did say that I had a Modigliani touch – all those long slender necks.

One year I painted three large canvasses with acrylics, and entered them in an amateur show in East Hampton, New York. The first one “Lymanade” (painted from a photo I shot) sold within minutes to an elegant patron of the arts who lived on Park Avenue. I was so excited to think that my work would grace the walls of her home…until she mentioned it was for her maid’s room. The second one was a beach scene that a French man purchased – he liked the primitive quality of my work. The third was a portrait of a friend, and I ended up giving it to him because it didn’t sell.

When I began to write I realized that I didn’t have time for art as well. I donated my supplies to a local adult Alzheimer’s unit in Boca Raton. I still take pictures now and then, but I use my iPhone.

I believe that everyone has a creative side to them; if you haven’t found yours yet I suggest you read The Artist’s Way by Julia Cameron. 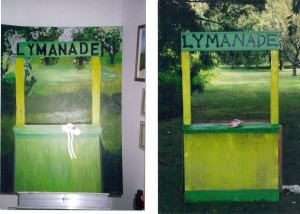 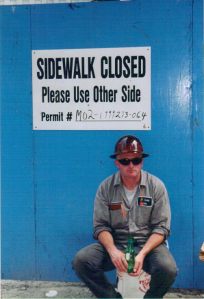 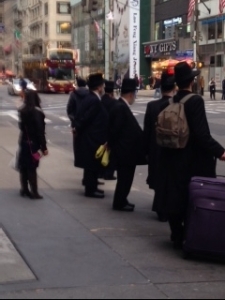 I shot these on the fly while in Manhattan. The Orthodox gentleman were waiting for a bus on Fifth Avenue and 57th Street. The open air flea-market type booth was on a side street, and the fascinating food truck was in the east 20’s.

I spotted this young lady deep in thought seated in front of a huge church on Fifth Avenue in Manhattan while thousands of people pass by. October 2014