Please feel free to use any of the material below when publicizing Carol White’s books.

Bio: Carol White, a Delray Beach, Florida resident, is a novelist, playwright and free-lance writer. Her essays, fiction, and columns have been published by The Sun Sentinel, Writers Journal, Insight for Playwrights, Working Writers, Woman’s World, The Florida Writer, and Senior Scene. She is a frequent fiction contributor to the East Hampton Star Newspaper. She is also a published poet.

She is an officer for the Boca Raton Branch, National League of American Pen Women, a group of professional writers, artists and musicians, and is also their Publicity Chair, and Letters Chair. Carol belongs to the Florida Writers Association Florida Mystery Writers, The Women’s National Book Association, and the South Florida Theatre League.

Her novels are contemporary fiction. “Hidden Choices” and “From One Place to Another” are on sale at Amazon.com, Barnes and Noble, etc., and at Delray Beach’s local mystery bookstore, “Murder on the Beach Bookstore.” “Sitting Pretty” Carol’s latest book is comprised of twenty short stories of different genres, and a novella.

Carol’s books are also in the Palm Beach and Broward County Library systems as well as in Parkland and Boca Raton city libraries. Her books were recently accepted into the Boston Public Library.

Her book, a collection of short stories plus a bonus novella, “Sitting Pretty,” was released in late February.

Carol’s essay, Mrs.Johnson and the Winky Dink Set will be published in NLAPW’s The Light Between Us. Information for book sales:  www.nlapw.org/bookstore

At the National League of American Pen Women’s Florida State Biennial in Orlando, Florida, Carol won First Place for one of her plays, and Third Place for a short story.

Carol’s Circle of Kindness article will be featured in the May 8, 2017 issue of Woman’s World Magazine.

Carol was recently interviewed about her books by Joanie Cox-Henry for the Sun Sentinel. 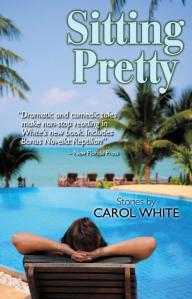 From One Place To Another: http://amzn.to/NM58Gq

Sitting Pretty has won a Pinnacle Book Achievement Award for Best Book in the Short Stories Category, and was one of the three finalists in the International Book Awards in 2014.